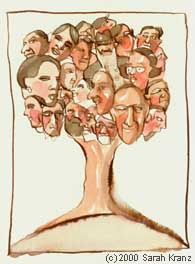 Moses instructs the people of Israel to appoint judges and law-enforcement officers in every city; "Justice, justice shall you pursue," he commands them, and you must administer it without corruption or favoritism. Crimes must be meticulously investigated and evidence thoroughly examined -- a minimum of two credible witnesses is required for conviction and punishment.

In every generation, says Moses, there will be those entrusted with the task of interpreting and applying the laws of the Torah. "According to the law that they will teach you, and the judgement they will instruct you, you shall do; you shall not turn away from the thing that they say to you, to the right nor to the left."

Shoftim also includes the prohibitions against idolatry and sorcery; laws governing the appointment and behavior of a king; and guidelines for the creation of "cities of refuge" for the inadvertent murderer. Also set forth are many of the rules of war: the exemption from battle for one who has just married, built a home, planted a vineyard or is "afraid and soft-hearted"; the requirement to offer terms of peace before attacking a city; the prohibition against wanton destruction of something of value, exemplified by the law that forbids to cut down a fruit tree when laying siege (in this context the Torah makes the famous statement "For man is a tree of the field").

The Parshah concludes with the law of Eglah Arufah - the special procedure to be followed when a person is killed by an unknown murderer and his body is found in a field - which underscores the responsibility of the community and its leaders not only for what they do but also for what they might have prevented from being done.