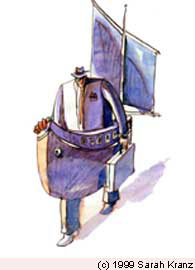 G-d instructs Noah -- the only righteous man in a world consumed by violence and corruption -- to build a large wooden teivah ("ark"), coated within and without with pitch. A great deluge, says G-d, will wipe out all life from the face of the earth; but the ark will float upon the water, sheltering Noah and his family, and two members (male and female) of each animal species.

Rain falls for 40 days and nights, and the waters churn for 150 days more before calming and beginning to recede. The ark settles on Mount Ararat, and from its window Noah dispatches a raven, and then a series of doves, "to see if the waters were abated from the face of the earth." When the ground dries completely--exactly one solar year (365 days) after the onset of the Flood--G-d commands Noah to exit the teivah and repopulate the earth.

Noah builds an altar and offers sacrifices to G-d. G-d swears never again to destroy all of mankind because of their deeds, and sets the rainbow as a testimony of His new covenant with man. G-d also commands Noah on the sacredness of life: murder is deemed a capital offense, and while man is permitted to eat the meat of animals, he is forbidden to eat flesh or blood taken from a living animal.

Noah plants a vineyard and becomes drunk on its produce. Two of Noah's sons, Shem and Japeth, are blessed for covering up their father's nakedness, while his third son, Ham, is cursed for taking advantage of his debasement.

The descendents of Noah remain a single people, with a single language and culture, for ten generations. Then they defy their Creator by building a great tower to symbolize their own invincibility; G-d confuses their language so that "one does not comprehend the tongue of the other," causing them to abandon their project and disperse across the face of the earth, splitting into seventy nations.

The Parshah of Noach concludes with a chronology of the ten generations from Noah to Abram (later Abraham), and the latter's journey from his birthplace of Ur Casdim to Charan, on the way to the Land of Canaan.