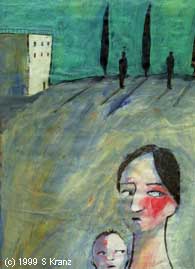 eventy-four of the Torah's 613 commandments (mitzvot) are in the Parshah of Ki-Teitzei. These include the laws of the beautiful captive, the inheritance rights of the first-born, the wayward and rebellious son, burial and dignity of the dead, the returning of a lost object, sending away the mother bird before taking her young, the duty to erect a safety fence around the roof of one's home, and the various forms of kilayim (forbidden plant and animal hybrids).

Also recounted are the judicial procedures and penalties for adultery, for the rape or seduction of an unmarried girl, and for a husband who falsely accuses his wife of infidelity. The following cannot marry a person of Jewish lineage: a bastard, a male of Moabite or Ammonite descent, a first- or second-generation Edomite or Egyptian.

Our Parshah also includes laws governing the purity of the military camp; the prohibition to turn in an escaped slave; the duty to pay a worker on time and to allow anyone working for you - man or animal - to "eat on the job"; the proper treatment of a debtor and the prohibition against charging interest on a loan; the laws of divorce (from which are also derived many of the laws of marriage); the penalty of 39 lashes for transgression of a Torah prohibition; and the procedures for yibbum ("levirate marriage") of the wife of a deceased childless brother or chalitzah ("removing of the shoe") in the case that the brother-in-law does not wish to marry her.

Ki Teitzei concludes with the obligation to remember "what Amalek did to you on the road, on your way out of Egypt.