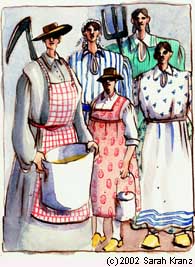 Aaron’s grandson, Pinchas, is rewarded for his act of zealotry in killing the Simeonite prince Zimri and the Midianite princess who was his paramour: G‑d grants him a covenant of peace and the priesthood.

A census of the people counts 601,730 men between the ages of twenty and sixty. Moses is instructed on how the Land is to be divided by lottery among the tribes and families of Israel. The five daughters of Zelophehad petition Moses that they be granted the portion of the land belonging to their father, who died without sons; G‑d accepts their claim and incorporates it into the Torah’s laws of inheritance.

Moses empowers Joshua to succeed him and lead the people into the Land of Israel.

The Parshah concludes with a detailed list of the daily offerings, and the additional offerings brought on Shabbat, Rosh Chodesh (first of the month), and the festivals of Passover, Shavuot, Rosh Hashanah, Yom Kippur, Sukkot and Shemini Atzeret.