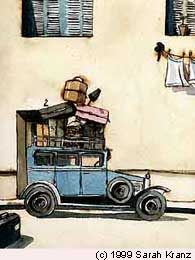 On the 1st of Shevat (37 days before his passing), Moses begins his repetition of the Torah to the assembled Children of Israel, reviewing the events that occurred and the laws that were given in the course of their 40-year journey from Egypt to Sinai to the Promised Land, rebuking the people for their failings and iniquities, and enjoining them to keep the Torah and observe its commandments in the land that G-d is giving them as an eternal heritage, into which they shall cross after his death.

Moses recalls his appointment of judges and magistrates to ease his burden of meting out justice to the people and teaching them the word of G-d; the journey from Sinai through the great and fearsome desert; the sending of the Spies and the people's subsequent spurning of the Promised Land, so that G-d decreed that the entire generation of the Exodus shall die out in the desert. "Also against me," says Moses, "was G-d angry for your sakes, saying: You, too, shall not go in there."

Moses also recounts some more recent events: the refusal of the nations of Moab and Ammon to allow the Israelites to pass through their countries; the wars against the Emorite kings Sichon and Og, and the settlement of their lands by the tribes of Reuben and Gad and part of the tribe of Menasseh; and Moses' message to his successor, Joshua, who will take the people into the Land and lead them in the battles for its conquest: "Fear them not, for the L-rd your G-d, He shall fight for you."