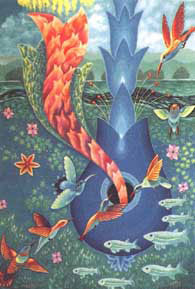 G-d creates the world in six days. On the first day He makes darkness and light. On the second day He forms the heavens, dividing the "upper waters" from the "lower waters." On the third day He sets the boundaries of land and sea and calls forth trees and greenery from the earth. On the fourth day He fixes the position of the sun, moon and stars as timekeepers and illuminators of the earth. Fish, birds and reptiles are created on the fifth day; land-animals, and then the human being, on the sixth. G-d ceases work on the seventh day, and sanctifies it as a day of rest.

G-d forms the human body from the dust of the earth and blows into his nostrils a "living soul." Originally Man is a single person, but deciding that "it is not good that man be alone," G-d takes a "side" from the man, forms it into a woman, and marries them to each other.

Adam and Eve are placed in the Garden of Eden and commanded not to eat from the "Tree of Knowledge of Good and Evil." The serpent persuades Eve to violate the command, and she shares the forbidden fruit with her husband. Because of their sin, it is decreed that man will experience death, returning to the soil from which he was formed, and that all gain will come only through struggle and hardship. Man is banished from the Garden.

Eve gives birth to two sons, Cain and Abel. Cain quarrels with Abel and murders him, and becomes a rootless wanderer. A third son is born to Adam, Seth, whose tenth-generation descendant, Noah, is the only righteous man in a corrupt world.

When the metzora (“leper”) heals, he or she is purified by the kohen with a special procedure involving two birds, spring water in an earthen vessel, a piece of cedar wood, a scarlet thread and a bundle of hyssop.