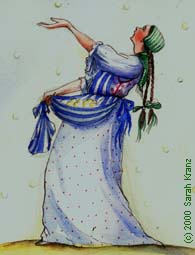 Soon after allowing the Children of Israel to depart from Egypt, Pharaoh chases after them to force their return, and the Israelites find themselves trapped between Pharaoh's armies and the sea. G-d tells Moses to raise his staff over the water; the sea splits to allow the Israelites to pass through, and then closes over the pursuing Egyptians. Moses and the Children of Israel sing a song of praise and gratitude to G-d.

In the desert, the people suffer thirst and hunger and repeatedly complain to Moses and Aaron. G-d miraculously sweetens the bitter waters of Marah, and later has Moses bring forth water from a rock by striking it with his staff; He causes manna to rain down from the heavens before dawn each morning, and quails to appear in the Israelite camp each evening.

The Children of Israel are instructed to gather a double portion of manna on Friday, as none will descend on Shabbat, the divinely decreed day of rest. Some disobey and go to gather manna on the seventh day, but find nothing. Aaron preserves a small quantity of manna in a jar, as a testimony for future generations.

In Rephidim, the people are attacked by the Amalekites, who are defeated by Moses' prayers and an army raised by Joshua.